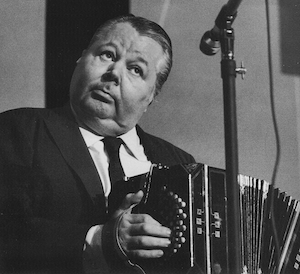 Aníbal Troilo was born 11. July 1914 in Buenos Aires, Argentina. He loved the sound of the bandoneón as a child, and he got his own instrument when he was ten. Already as a teenager, he was active as a musician. During his first adult years, he played in different ensembles before forming his own orchestra in 1937. They recorded for the first time the next year.

Troilo played bandoneón in his orchestra the whole time. He wasn't a virtuoso like Laurenz, but it seems like every tone he does play has great meaning. Watch him play with his orchestra in this YouTube video. Troilo's solo is from 1:12 to 1:34 in the film, whereas the variación bandoneón solo towards the end is played by the first bandoneonist.

As was common for the tango orchestras of the era, Troilo's orchestra played music by many different composers. But Troilo also composed many great tangos. Among his most well-known compositions are tangos like Barrio de tango, Desencuentro, Garúa, María, Mi tango triste, Toda mi vida, and the vals Romance de barrio.

The poet Adrián Desiderato said about Troilo's death: «It was on an eighteenth day of May when the bandoneón happened to let Pichuco fall from its hands.»


Photo of Troilo by Alicia D'Amico.

If you don't see the graphs below, please check that JavaScript is enabled in your browser.

NB Graphs and discography are work in progress, so there might be errors.

TANGO NOTES focuses on the music we use for dancing today. This means that the below charts and discography includes the genres tango, vals, and milonga recorded after 1927.

Troilo recorded a few songs from other genres as well.


Here's an overview of Troilo's recordings, sorted by year and genre.
Hover / tap the circles to see the titles and other details about the recordings!

In the below interactive "Bandoneón chart", you can see which years Troilo made recordings, with which singers, and which titles.

The singers in the traditional tango orchestras weren't considered to be big stars, like singers are today. They were just another musician - and most tango orchestras employed different singers. Later, the singer would gradually get a more prominent role in the orchestras.

Hover / tap the bars to see the total number of recordings Troilo made with his different singers, in order of appearance.

NB: work in progress! Most likely some errors.

Get notified about updates here.

◉ Troilo recorded some songs multiple times during his career. Click "TITLE" to see these songs next to each other and compare listening examples.

◉ "Also recorded..." refers to other recordings by Troilo, not by other orchestras.